This morning was one of those days that are terribly hard to replicate. It started off with the phone ringing early and Wendy announcing excitedly that Symondsbury Estate had won first place in The Melplash Agricultural Society’s best managed and cultivated farm.  Furthermore, we had secured best-managed livestock on farms 600 acres and over. With this wonderful news ringing in my ears, I stepped outside to be greeted by the birds singing lustily and the sun streaming over the hills.

The announcement of this prestigious award meant it was time to introduce Brian, the Estate Farm Manager.

It’s August, quite possibly one of the busiest months in the life of a Farm Manager and so catching Brian with time to talk was never going to be easy. In the end, it was a case of tracking him down clutching notebook in hand. Although Brian might tell a different version of the woman that revved her car up a dusty hill completely obliterating the gentleman on his tractor following behind… 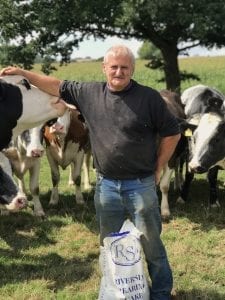 Brian has worked on Symondsbury Estate since 2014 and in that time has completely turned around the farming practices.

At this point, the land was in a poor state with yields decreasing year by year. Part tenanted and part under share farming agreements it was time to take a fresh approach. Brian was taken on with a view to taking the farming operation back in hand. Hitting the ground running Brian immediately put in place various schemes, including land drainage, acquisition of machinery, fencing, cropping plans, livestock purchase (28 beef steers) and everything else involved in what was, in effect, a new venture. Comprising of 1,500 acres the farm is split into 700 acres arable, the remainder down to rough grazing and small pockets of forestry.  Crops are oats, barley, wheat and forage maize.

This year the wheat crop will be used for bread making by Hovis and biscuits. The oats will go for milling with the barley used for feed and the maize sold as a standing crop. Brian’s biggest challenge was getting the quality of the grain just right. To achieve this and up productivity, the condition of the soil has been greatly improved by ploughing and sensible application of fertilizers and other conditioners.

Being mindful of the overall ecology of the Estate, strips of 5 metres are left against any natural water. They try to avoid using insecticides relying on ladybirds and spiders which are natural predators against aphids that carry crop diseases. The unfarmed areas are managed to encourage native species of plants and wildlife.

On the Estate Red Kites, Green Woodpeckers, Woodcock and Deer can be seen amongst many other native species. This is one of the very many reasons why it is such a delight to stay in one of the cottages which lie around the Estate. You really are surrounded by nature in every sense of the word. I took the opportunity to savour the undulating folds of the land so typical of West Dorset. Bilshay has such an excellent viewpoint!

I asked Brian what his favourite time of year was to which he replied, ‘Harvest Time’. That’s when all the hard work comes to fruition. His working hours are a completely moveable feast depending entirely on the seasons and the weather.

A trailer arrives in the yard to unload a few tonnes of biscuit quality wheat. I take a large handful and let it trickle through my fingers rubbing it gently with thumb and forefinger as I have witnessed the judges doing at various farming shows. The grain looks even and plump to me and Brian seems pleased with it. He then gets out a machine to assess the moisture content and announces he is happy with that too. I seem to have caught him on a good day. I thank him profusely for his time and enquire whether he has had his lunch yet. He admits to eating his sandwiches whilst on the go as time is of a premium which must surely be a signal that time has been called on our chat. ‘Next time I bite into a biscuit’ I say, ‘I’ll think of you’. Husband jokes that as I am on a diet it won’t be very often which for some reason the two of them find rather amusing. I can’t for the life of me see the joke myself….

Keep up to date

Keep up to date with Symondsbury life, news & events.

Keep up to date

with the latest special offers and news from Symondsbury Estate.